Discover the famous hills of Rome by Vespa! This tour will introduce you with a lot of hidden gems and unique paths outside Rome’s usual tours. Rome was built on 7 hills and you will get a chance to visit Ancient Roman monuments, beautiful churches and enjoy romantic panoramic views of the eternal city.
You will have a chance to drive the Authentic Italian Vespa following your guide during a tour that will bring you at the time of La Dolce Vita like in a Fellini’s movie.

We will stop to admire the most famous monuments of the Ancient Rome such as the Colosseum, Circus Maximus, Mouth of Truth and the Imperial palace. Then will will reach the top of the Janiculum hill where a cannon shoots on Rome every day at 12:00 and tell you why.

You will have a look at the famous key-hole, through it you will have the chance to see 3 countries all together (Italy, Vatican and the Sovrano Militare Ordine di Malta). Along our tour we will stop quite often to admire breathtaking and romantic aerial views of Rome.

It is an easy tour: three our duration max. 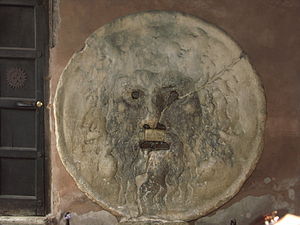 La Bocca della Verità (English: the Mouth of Truth) is an image, carved from Pavonazzo marble, of a man-like face, located in the portico of the church of Santa Maria in Cosmedin in Rome, Italy. The sculpture is thought to be part of a first-century ancient Roman fountain, or perhaps a manhole cover, portraying one of several possible pagan gods, probably Oceanus. Most Romans believe that the 'Bocca' represents the ancient god of the river Tiber.Learn More 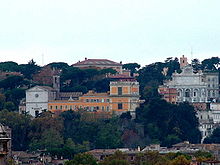 The Janiculum is a hill in western Rome, Italy. Although the second-tallest hill (the tallest being Monte Mario) in the contemporary city of Rome, the Janiculum does not figure among the proverbial Seven Hills of Rome, being west of the Tiber and outside the boundaries of the ancient city.Learn More

End of the Tour